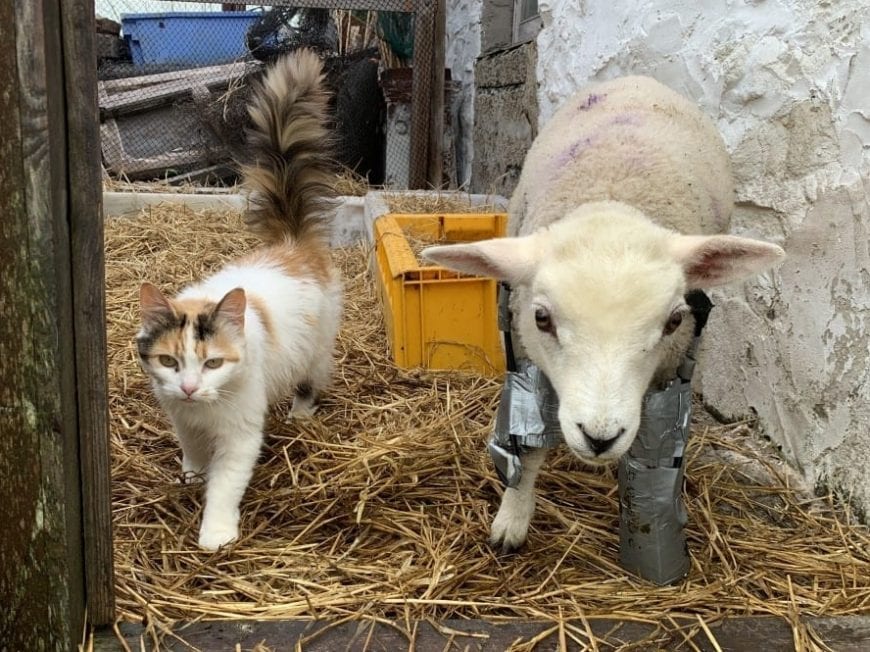 This adorable footage shows a disabled lamb walking with homemade ‘bionic’ legs – as it lives on a remote island with no vet.

Blossom, a three-month-old sheep, nicknamed ‘Bionic Blossom’ by her owner, was abandoned by her mother shortly after she was born.

She has been hand reared since she was one month old after developing nephrosis.

It meant the little lamb was unable to suck milk, so owner Rachel Challoner, 42, had to feed her by bottle.

Rachel runs a croft on tiny Fair Isle, Shetland – which is so small that it doesn’t have a vet.

She had to use her ingenuity to come up with homemade supports for Blossom’s front legs – which were made out of drain piping and metal rods.

She posted videos on Twitter of the animal walking with the fabricated supports – with one video attracting more than 23,000 views.

Former music teacher Rachel, who works as an admin assistant, primary school relief cook and volunteers as a chapel organist on the island, said: “One day I went down to feed the ewes and her front legs wouldn’t work.

“We’re a very remote island and don’t have a vet, but one of my friend’s sons is a vet so I sent him pics and videos and he said it looks like spinal nerve damage.

“He recommended steroids and a course of injections.

“During that time she improved from not using her legs at all to standing up, but because she’s not been using them her muscles have really weakened.

“Once the treatment ended there was nothing more we could do from a medical point of view.”

With few options left, a friend of Rachel’s, who is the island nurse, stepped in to lend a hand in finding a solution to Blossom’s leg problems.

After seeing the struggling lamb, Rachel’s friend’s husband came up with the idea of the makeshift leg supports.

Rachel said: “One day after work Vicky came over to have a look.

“She used her medical experience and knowledge and said we need something that’s going to do ‘X, Y and Z’.

“Her husband Bob, who is an incredible handyman, came up with the first pair of splints, like callipers, that were pipe lagging with wooden dowel rods, which worked fine.

“We made sure she could still lie down and get back up.

“But when she lay down one day she snapped one of the dowel rods and I asked if there was anything we could do.

“Bob found thin metal rods and that was her ‘mark II’ legs which have done a fantastic job.

“Those legs worked fine for a while and we were taking them off every couple of days to make sure Blossom wasn’t getting any sores and her right leg started to really improve.

“Now she’s getting around ever so well and I’ve watched her running across the ground.”

But while Blossom’s right legs continued to strengthen, her left leg remained weak, so the homemade leg supports were tweaked, with extra holes drilled, to make them slightly more flexible.

Rachel, who has close to 100 lambs and sheep on her croft, said: “We had another look so she’s now got the ‘mark III’ legs.

“I put them on Blossom first thing in the morning and take them off her at night.

“It’s really trying to help her function normally as a sheep and it’s really working.

“She’s always been a healthy lamb apart from her legs.

Despite the possibility of Blossom never bearing any lambs of her own, given her weak limbs, Rachel isn’t worried and is happy to keep her regardless.

It means she might avoid the fateful boat trip to the market in Shetland on the aptly named ‘Good Shepherd’.

She said: “I’d never put a ewe through the strain of birth for the purpose of having lambs so it’ll depend on how well she comes.

“I’m not business minded enough as a crofter to say she’s no good.

“I’d love for her to make a complete and full recovery and go on and have her own lambs but if I think it’ll put too much pressure on her body she’ll just be a companion animal so we’ll just see.”