A granddad who was revived on the tarmac after collapsing during a marathon crossed the finish line of the same race just one year later.

Dwayne Pickens, 64, was running in the Dallas Marathon in December 2017, when he suffered a massive heart attack at the two-mile mark.

A firefighter and a nurse running the race realized Dwayne’s heart had stopped and administered CPR until a defibrillator arrived on the scene.

The grandad-of-13, of Dallas, Texas, was rushed to Baylor Scott & White Health where he underwent a quadruple bypass.

Dwayne was shocked to learn his arteries were up to 90 per cent blocked despite being a runner and a regular on the golf course.

Determined to return to the scene of his “perfect storm” Dwayne signed up to compete in the race just one year after his open heart surgery.

Dwayne, a director of technical sales, ran 6.2 miles of the Dallas Marathon in December and said crossing the finish line was emotional.

The grandad said: “I was always healthy. I always ran.

“In my life I had run three or four marathons and I am a big golfer.

“We made a plan to go to Ireland for a golfing vacation in May 2017 and I wanted to be fit so I started running a little bit more, several times a week for four or five miles.

“After that vacation I felt really good and my colleagues at work asked me if I would like to take part in a Dallas Marathon relay.

“I was about two miles into the run when I started to feel odd.

“It was a cooler day in Dallas, and my lungs were starting to hurt but I just put it down to the temperature. 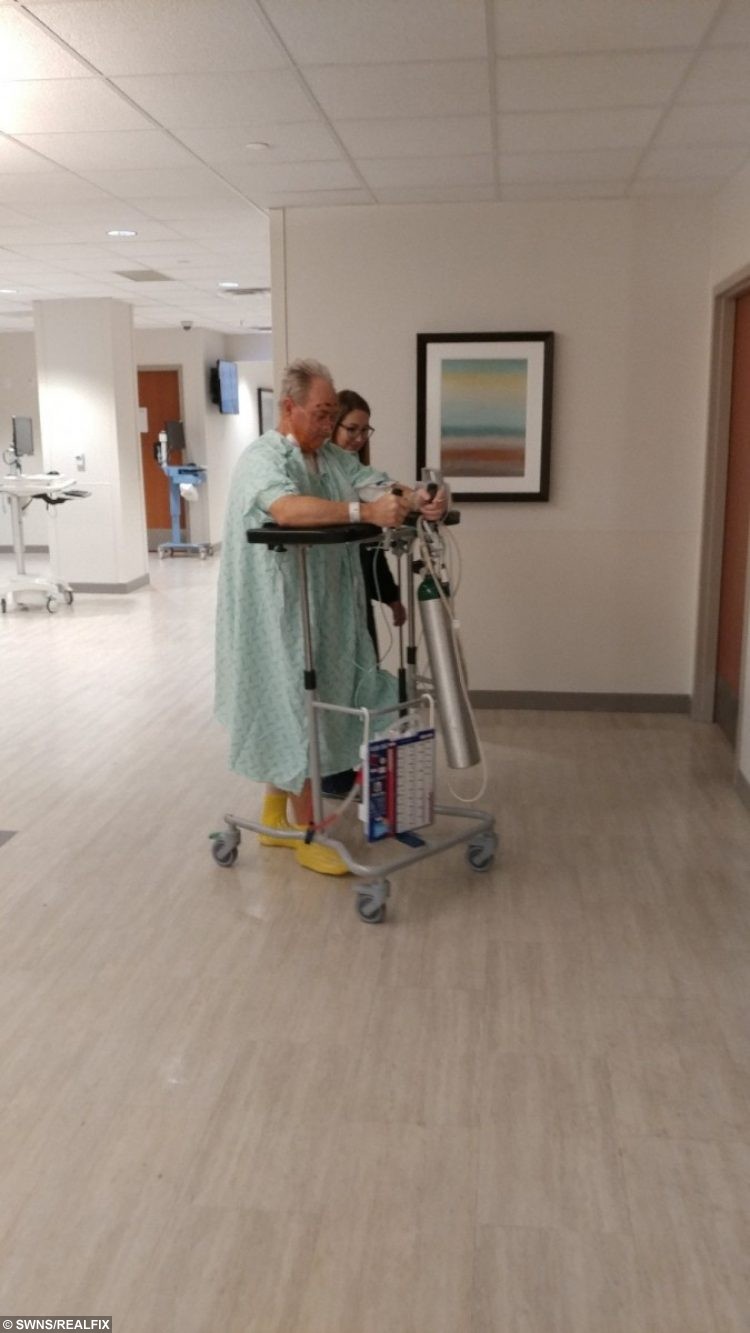 “I was having trouble breathing but I continued to run.

“The next thing I remember is waking up in hospital, it was scary.

“I completely passed out flat on my face.

“I was fortunate that a firefighter was running right behind me and stopped.

“He couldn’t find a pulse so he started CPR with a nurse who was also running.

“Hearing the 911 call over the radio, a Dallas Lieutenant was about a block away and he had a defibrillator.

“They managed to get my heart beating again.

“It was very frightening when they told me I’d had a heart attack.

“My doctors told me that my arteries were 80 to 90 percent blocked.

“It was the perfect storm that I had been doing the race when it happened because who knows how it would have turned out if I was in Ireland.

“I had to have quadruple bypass surgery which was very scary.”

After his surgery, the dad-of-four qualified for a cardiac fitness program in which he attended 36 personal training sessions in Baylor-White and Scott Health.

Dwayne gradually began to regain his fitness with the encouragement of his cardiac surgeon Dr Baron Hamman, who promised they would run the race together in 2018.

Dwayne said: “When I woke up from surgery, my cardiac surgeon told me he was going to run the marathon with me next year.

“This guy just sewed me up and here he was talking about running the race next year.

“It was really encouraging.

“During my first check-up he told me he was serious.

“At the time he was overweight and he lost about 20lbs training for this.

“All of my family was there, it felt like I was coming full circle.

“To celebrate it with my sons, my wife and all my friends, that was really special, and my surgeon too.

“My doctor wants to do the race again next year.”

The dad said he wouldn’t have gotten through a tough year without the support of his wife Janice Pickens, 62, and sons Jason, 44, Ryan, 42, Jonathon, 39, and Matthew, 36.

Dwayne warned others to adhere to their annual physicals because not booking an appointment could have cost him his life.

“I had not gone for a physical for several years. I moved from St Louis to Dallas and I hadn’t yet established a local physician.

“But I still had a heart attack.

“People need to get check ups regularly and keep up to date with their physicals because it could save your life.

“It could have cost me mine.”