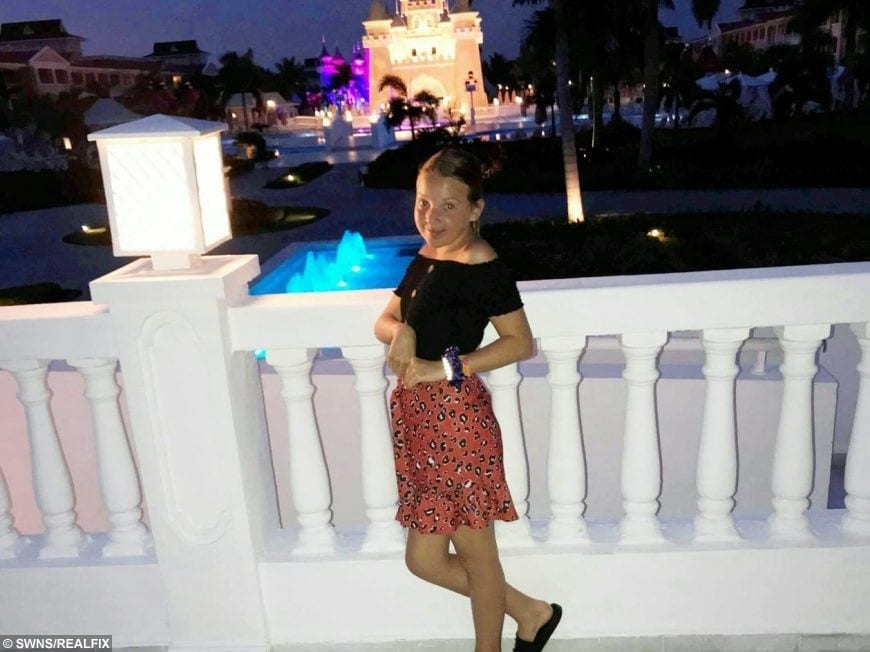 A brave schoolgirl defied the odds to wake up from a coma after contracting deadly sepsis – from a sore throat.

Kiah Stone-Richards, 12, went to bed with a throat infection but rapidly went downhill through the night.

She had developed sepsis withing hours – a life-threatening infection which occurs when the body starts attacking its own organs.

The little girl was rushed to hospital where her mum Hayley, 32, found her surrounded by 25 doctors and nurses battling to save her life.

Kiah was hooked up to a life-support machine and despite the odds stacked her, she bravely fought off the infection and woke nearly eight days later.

Hayley, a dental receptionist, from Hucknall in Nottingham, said: “I’d never even heard of sepsis let alone the symptoms.

“One minute Kiah was fine and the next minute she was hooked up to a life-support machine.

“At one point, she was surrounded by 25 doctors and nurses fighting to save her life.

“It was like an episode of Casualty. It just didn’t feel real.

“I asked the doctors: ‘Will she survive this?’ and they couldn’t tell me.

“I thought that was it – I was going to lose my little girl.”

Kiah, who was a perfectly ‘fit and healthy’, came home one evening after school in December 2018, complaining that she felt unwell.

She’d lost her appetite and Hayley and dad, Asa Richards, 37, a machine driver, thought she might have flu, so tucked her up in bed.

The next day Kiah was kept home from school, but she began to rapidly go downhill in a matter of hours.

She was found ‘blue and unresponsive’ by her grandmother Sharon, 53.

Hayley said: “The day before Kiah went to hospital she seemed fine.

“We went to Tesco after school for a quick shop and she was skipping around the aisles with her little sister.

“But the moment she stepped through the door she was complaining of feeling unwell and she called me upstairs in a panic because she’d been sick in the shower.

“I thought she was just coming down with the flu so I got her some Calpol and put her to bed.

“The next day I left for work and she seemed a bit unwell still but fine.

“Later that day I checked my phone and I felt a twinge of panic because I had loads of missed calls from my mum.

“She said Kiah wasn’t doing well, they had called 999 and paramedics were there.

“Apparently she had been hot and shaky and alarm bells started ringing when mum saw a rash appearing all over her body.

“The worst part was that they didn’t know what was wrong, but at the time I thought it was meningitis.

“I had no idea it would be something just as serious.”

Hayley rushed to Queens Medical Centre, Nottingham, where she found her little girl surrounded by doctors and nurses who were battling to save her life.

Hayley said: “The staff had to prepare me for what I was about to see and said that everyone was there to help Kiah, but it was still a shock.

“I begged them to keep her alive, I was completely and utterly terrified.

“She looked so pale and when I gave her a kiss she felt cold to the touch.

“The next 24 hours were crucial and we had no idea if she was going to pull through.

“They put her in an induced coma when she got into resus because her body was shutting down and it was the safest thing to do – it was our only option.”

The doctors explained that Kiah had developed sepsis – a life-threatening condition which occurs when the body’s immune system starts attacking its own organs in an attempt to fight off infection.

Hayley said: “It’s hard to spot sepsis, there are lots of symptoms, and I would never have thought to look out for it.

“They think it all started from a throat infection.

“The doctors had to drill a hole in her shin in order to ‘pump’ a cocktail of drugs into her system to help her fight the infection.

“She was hooked-up to a life-support machine and put in a medically induced coma, all we could do was wait.

“The next few days were a roller coaster – lots of ups and downs.

“We were given a room to sleep in on the intensive care ward so we were there 24 hours a day but we didn’t really do much sleeping.

“Every hour was crucial and the doctors are updating you hour by hour.

“They’re telling you to get some rest but it’s hard to rest thinking that hour could be the last you have with your daughter.

“It was also very scary for Myla-Rae to see her sister like that.

“Myla-Rae understands when someone is poorly but they can normally still walk and talk, she’s never seen someone as unwell as her sister, so it was hard for her.

“We were told not to get out hopes up and we expected it to take a while before she would wake up.”

She said: “Kiah was in intensive care for nearly eight days and suddenly showed signs of improvement.

“I popped down the corridor for a coffee when the nurse came rushing towards me.

“The doctor was taking her off the ventilator because she was breathing on her own.

“It was amazing and then on Christmas Eve, Kiah opened her eyes – it was a miracle.

“She was well enough to open some presents and having lunch with us.

“I couldn’t believe how quickly she’d come around, she defied all our expectations.”

Although the infection left her with some ongoing health issues, Kiah was well enough to go home after three weeks, and has gone from strength-to-strength over the last year.

Hayley said: “The infection had left Kiah with a weakened heart from a condition called cardiomyopathy.

“Because of this, Kiah needs to go to the cardiologist every three months to keep an eye on her heart.

“She can get quiet out of breath from running so she struggles in PE but apart from that she’s doing really well.

“She’s gone back to school full-time and she’s really bounced back to her happy, bubbly self.

“You’d never believe she was in the hospital fighting for life at the beginning of last year.