HomeHealthMost PopularRelationships‘It Doesn’t Matter How Long I Have With Him, As Long As I’m With Him’ – Brave Bride Who Lost Her Arm To Cancer Has Got Married After Receiving Devastating News She Is Terminal 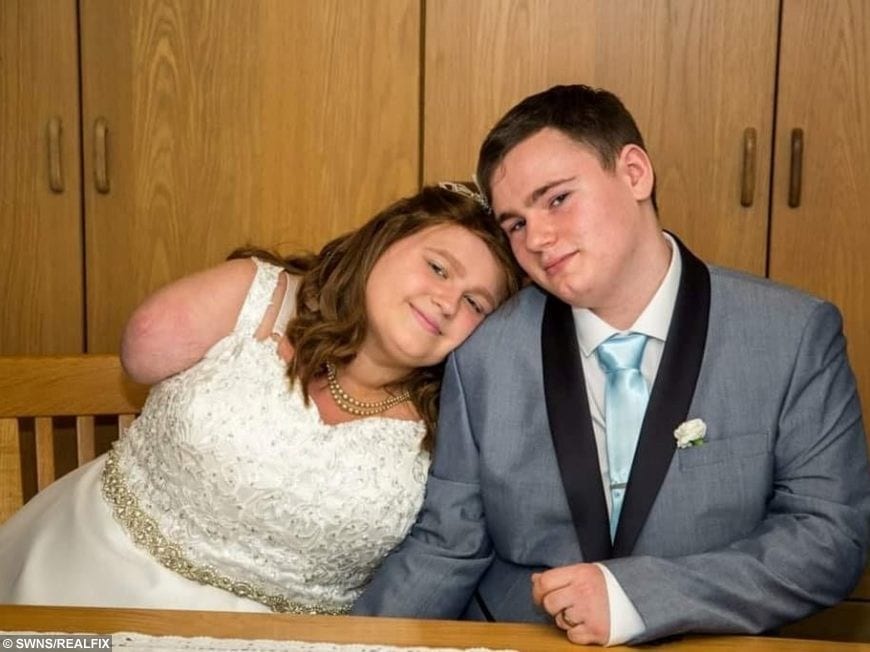 A brave bride with cancer bought herself more time to find and marry the man of her dreams – by having her arm amputated.

Shannon Lynch, now 21, has battled a rare cancer in her elbow for the last six years and had her arm amputated in 2017 to stem the progress of the disease.

But it returned earlier this year and was terminal – doctors gave her just a year to live.

However the operation had bought her enough precious time to meet Ashley, 18, and walk down the aisle before the cancer claims her life.

The couple, from Edenbridge, Kent, are now making the most of the short time they have together as husband and wife.

Shannon said: “My wedding day meant everything to me, and it’s lovely to be able to show the world that I’m devoted to the one I love for the rest of my life.

“It doesn’t matter how long I have with him, as long as I’m with him and we are happy.

“Married life is better than I ever thought it could be, it’s better than people say it is, I’m always happy when I’m with him.

“We are trying to make memories together but it’s hard at the same time because I can get ill and tired very quickly.”

Shannon’s battle with cancer began when she was just 15 years old after she visited the doctor with a lump in her right elbow in June 2013.

She was initially dismissed with doctors putting it down to ‘tennis elbow’, but after the lump grew bigger and more painful, she was sent for an ultrasound, blood test and biopsy.

In July 2013, Shannon was diagnosed with synovial sarcoma – a rare type of cancer that affects soft tissues.

The young teenager underwent chemotherapy and radiotherapy treatment before having an operation in March 2014 to remove the lump.

Shannon said: “I didn’t feel as scared as you’d expect when they said it was cancer – I just knew the most important thing was to fight and that I would concur everything standing in my way.

“I felt bad as my mum was forced to come with me because of my age and she missed out seeing the rest of my family.

“I hated the chemotherapy but I had no choice. I just felt weak and ill all the time, it just drains the energy from you.”

Shannon had check ups every three months to make sure the cancer hadn’t returned but was devastated when another lump appeared in July 2017.

The cancer was back in the form of a Grade 3 sarcoma, and in order to stop the cancer from spreading further, the doctors had to amputate Shannon’s right arm.

Shannon said: “I knew giving up my right arm could be a struggle for me as I would have to learn to write and do activities with my opposite arm.

“If I didn’t have my right arm amputated, then I would have got tumours in my lungs a lot earlier. It was simple – either die or have it removed. So it set it in stone for me.

“When I woke up after surgery, the first thing I did was look at my arm and saw they saved a lot more than I’d expected – I thought my entire arm would have to come off.”

Shannon’s right arm was amputated just above her elbow in August 2017 and the brave teenager adjusted to living life to the full with one arm.

It was in December 2018 when Shannon joined her brother to play video games on Xbox Live that she got chatting to his friend Ashley.

The pair started talking every day on the gaming platform and just a few weeks later, they met in person and it was love at first sight.

Shannon said: “I joined an Xbox Live party with my brother and Ash was in the group.

“Something just clicked between us and then we started chatting loads.

“I already knew so much about him from my brother, we just bonded almost instantly.

“We met up for a drink at Costa Coffee and I just fell for him immediately.”

Ashley and Shannon officially started dating in January 2019, but after a few months of romance, disaster struck.

Shannon was taken into hospital with a kidney infection in May 2019, but as the kidney treatment worked, she suddenly had extreme chest pain.

Taken for a CT scan, doctors saw that Shannon’s lungs were filling with blood, caused by three tumours inside her lungs.

Doctors told Shannon that her cancer had returned and this time it was incurable.

In July 2019, Shannon was devastated to hear that she had less than a year to live.

Shannon said: “My whole world turned upside down. I was terrified as I know how hard it is to treat lung cancers.

“When they told me I had less than a year to live, I was shocked as I thought I would have longer than that.

“The doctors said that chemotherapy would give me extra time here, but it wouldn’t save me, which was heartbreaking to hear.

“They said I had anywhere from a few months to a year, but I’m still fighting after the few months so I am pleased to have made it to now.”

Shannon’s devastating diagnosis only brought the couple closer, as Ashley took on the role of being his girlfriend’s carer.

A month after they found out that Shannon would die in the next year, Ashley surprised her with a ring.

Shannon said: “We were at home when Ashley came over to me with one hand hidden behind his back.

“He said that he wanted to be with me for the rest of his life and then he got down on one knee and asked me if I wanted to marry him.

“I said yes and was desperately trying not to cry – I couldn’t believe it, I was just so excited for our future together.”

Ashley said: “What made me fall for Shannon was that she was so open and also because she had the cutest laugh in the world.

“I proposed because I honestly thought it was time – from the first day I met her, I wanted to marry her.”

The young couple tied the knot on 26 October 2019 in front of 100 friends and family members at their local church.

Shannon held a bouquet of pink flowers for the service, and their wedding reception was adorned with pink and blue decorations.

The brave bride opted to wear a wig for her wedding service but removed the brunette do for the reception.

Shannon said: “Our wedding was beautiful, the cake was the best I’ve ever tasted and the decorations were so lovely.

“Ashley and I were both really nervous, but as soon as we were together, everything felt okay again.

“The wedding just felt so surreal, and I wouldn’t have changed it in any way.

“I wore a wig for the service as I wanted some nice pictures of me with hair in my wedding dress, but it was just too itchy to wear at the reception.

“When they pronounced us man and wife, I felt so extremely happy and excited for mine and Ash’s future.”

Since the wedding, Shannon and Ashley have happily settled into married life and are making the most of the short time they have together.

Shannon is currently going through chemotherapy to extend her time with her new husband and the pair are focusing on enjoying every day.

Shannon said: “I am happy for all the time I get with my husband, my family and my friends.

“Ashley and I haven’t really spoken about the future as we would rather forget that I’m going to die soon and think about it when I get to that stage.

“It is difficult for Ashley but he understands and is grateful for all the time we do get together.

“He told me that he is terrified that every morning he wakes up, I could have gone in the night.

“I’ve come to terms with it now – whatever happens, happens. I can’t choose how long I can live for, I’m just grateful for the time I do get.”

Ashley said: “I’m not gonna try and hide from the fact that I will lose her to something that I have no control over.

“It’s the hardest thing I have to face in my life and every time I think about it, I almost cry.

“In all honesty, I am trying to make the best memories I can with Shannon. I want to make her dreams come true.”

« Previous post 'I Feel Safer On The Streets. People Look Out For Me' - Former High-Flying Banker Is Now Homeless And Living In A Bus Shelter
Next article » 'I Could See Blood, Skin And Fat Everywhere' - Babysitter Feared She'd Die After Siberian Husky Savaged Her In Brutal 45 Minute Attack