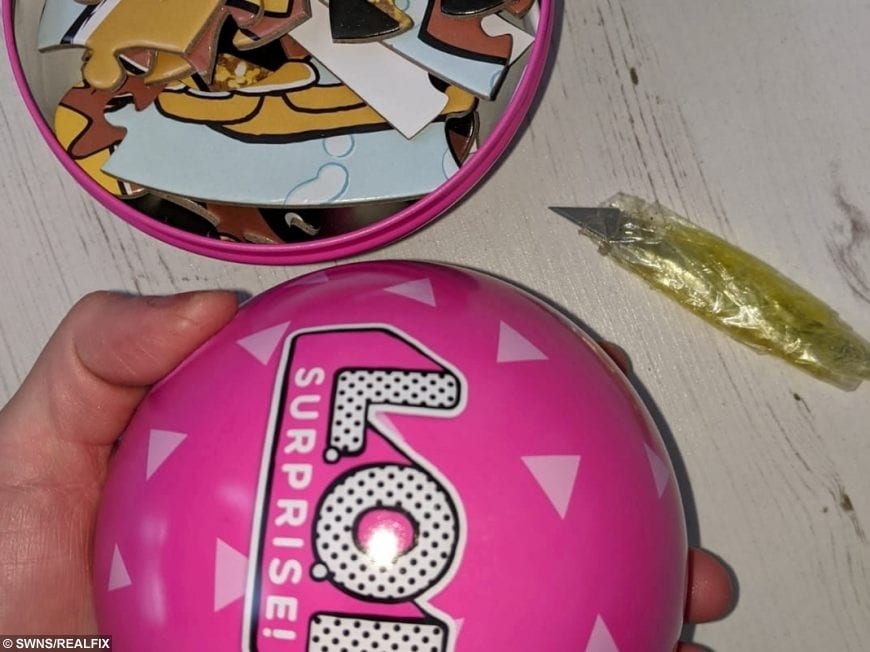 A mum was shocked when her six-year-old daughter opened her new LOL Surprise ball toy – and found a sharp BLADE inside.

Mum Amy was horrified when Delilah found a two-inch long metal blade among the puzzle pieces.

Thankfully, Delilah alerted her shocked mother, who complained to the manufacturer, which has now launched an investigation.

Amy, from Portsmouth, Hants., said: “I’d bought a load of presents for my kids in the sale at Sainsbury’s and had been excited for them to get to play with their new toys.

“Delilah opened the case of her LOL Surprise puzzle toy a few hours after we’d finished unwrapping presents and picked out the blade amongst the puzzle pieces inside.

“Luckily, she did not cut herself but the sharp blade bit was poking out dangerously.

“I have another child, my little boy Arlo who is four years old, and I can imagine if Arlo was the one who opened the toy then he would have easily cut himself.”

Mum-of-two Amy bought the toy from Sainsburys in Portsmouth on October 17 during a sale, and put them away from Christmas.

The hairdresser and husband Anthony, 31, watched as their daughter opened the plastic ball containing a 60 piece surprise puzzle.

Amy said: “Me and her father and her brother Arlo were luckily sat next to her as she opened her present as she was really excited to see what was inside.

“She then picked up the blade amongst the puzzle pieces and asked us if that’s meant to be in there and said ‘this is sharp’ and she handed it to us.

“Then we realised it’s wrapped in some kind of tape with a very sharp blade hanging out and realised that it was not part of the toy.

“Thank God she didn’t cut herself. I just hope no one else has found a blade in their Xmas toy as well.

“I assume it was either planted by a worker or maybe they use that tool in the warehouse and accidentally dropped it in.

“I’m hoping somebody just dropped it by accident, and not someone planting sharp blades in children’s Christmas toys.”

A Sainsbury’s spokesperson said: “We are in contact with Amy and supporting Spin Master’s investigation.”

A spokesperson for Spin Master – which manufactures the toy for multiple retailers – said: “We are very sorry to hear about this unfortunate incident.

“At Spin Master, we are committed to providing the highest quality toys for our customers and child safety is our top priority.

“We believe this is an isolated incident and will be investigating thoroughly.”

LOL did not respond to a request for comment.

But in an email to Amy said: “We would like to assure you that this is being investigated and will be passed to the appropriate manufacturer for further investigation.”