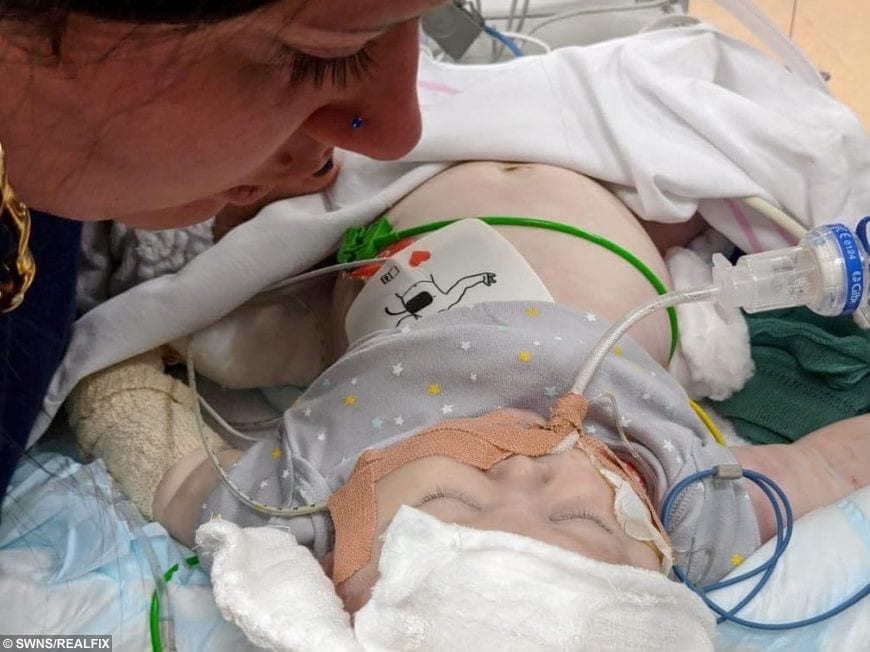 A heartbroken mum has spoken of the anguish of watching her tiny baby’s body slowly shut down as he died from sepsis, after being sent home from hospital twice.

Five-week-old Luchii Gavrilescu was twice sent home with a common infection by medics at Queen Elizabeth The Queen Mother Hospital (QEQM) – despite many of his symptoms pointing to sepsis.

On Luchii’s third visit to A&E at the hospital, in Margate, Kent, he had to wait almost six hours to be seen by a consultant – by which point it was too late to save his life.

Hospital chiefs have since admitted that the baby’s death was “avoidable”, while a damning report reveals that failed to recognise the severity of his symptoms – and did not escalate the case to specialists.

Now Luchii’s mother, Laura Cooke, has described the horrifying hours that led up to her son’s death, and demanded a public apology from the hospital’s trust.

She twice took Luchii to A&E at the QEQM, once on November 29 after struggling to get a doctors appointment and again on December 3 after her GP voiced serious concerns over the baby’s condition.

On the first visit, when he was suffering breathing difficulties and had developed a rash, he was diagnosed with a common bronchial infection and sent home.

Four days later, Laura took Luchii to her GP as he was not feeding properly and his skin was mottled, and was advised to take him straight to A&E.

But again the worried mum was told it was just a routine infection, with Luchii not seeing a consultant or undergoing any tests.

Three days later, Luchii died at the hospital after suffering a cardiac arrest caused by sepsis.

The devastated mum believes multiple mistakes were made in the care provided to Luchii, telling how she reached breaking point on the morning of his death on 6 December.

The 29-year-old, who is also mum to Archie, ten, and nine-year-old Macie, called 999 at 11.16am after noticing that Luchii was floppy and struggling to breathe.

She said: “I got him out of the car seat and he was panting like a dog, he couldn’t breathe. I knew he wasn’t right.”

A first responder arrived within four minutes and noted Luchii was crying – a sign the paramedic apparently took as positive, so downgraded the severity of the case to call operators.

An ambulance therefore did not arrive at the house until an hour after the first responder arrived, with Luchii not reaching the QEQM until 12.30pm.

Laura added: “Even when I arrived I was sat on a chair in A&E holding Luchii, and he was still floppy and unresponsive.”

Over an hour later, Luchii had been tested and it became clear that he was suffering from sepsis – but nursing staff and a junior paediatrician still failed to take his case to a consultant.

It was only when the stricken boy arrived on a children’s ward – after over four hours of waiting for a bed – that a doctor saw just how ill he was.

Laura said: “They had to call a crash team, then went to the theatre.

“They were running through a corridor trying to put a respiratory tube down his throat. It was chaos.

“They were running with him in his cot telling us to stay back.”

Adam Cooke, Luchii’s uncle, says the family were then told Luchii was stable, but they didn’t get the chance to see the baby alive again.

He said: “Laura was never asked to go to see him. She should have been with him the whole time, but we were taken into another room. Nothing was done right.

“We need an apology from every person involved over those three visits because they all messed up.”

Devastated Laura says she had put her trust in the medics, but believes her son was failed by every person who dealt with him.

She said: “I just sat with him laying there in A&E, holding his hand as we waited for a bed on the children’s ward and I now know that he was dying, his organs were shutting down. This will haunt us all forever.”

An investigation has been launched and, during a meeting with the family, lead investigator Dr Paul Stevens, medical director of East Kent Hospitals, admitted Luchii’s death was avoidable.

The Trust’s incident report says Luchii’s condition was “underestimated” and should have involved paediatric and intensive care consultants at an earlier stage.

Laura added that her partner, first-time dad Vlado Gavrilescu, 29, is struggling to come to terms with his son’s death.

She said: “Vlado is not coping well. He can’t accept it.

“He can’t understand how you take your child to the hospital to get looked at, and you leave without him.

“Archie won’t sleep in my house anymore, and he’s not sleeping well.

“Macie keeps crying; she doesn’t understand why they went to bed and their little brother was there and they woke up in the morning to be told he’s gone to heaven.”

An East Kent Hospitals spokesman said: “Our thoughts and deepest sympathies go out to Luchii’s family, and we are extremely sorry that they have suffered such a devastating loss.

“We apologise that they have concerns about Luchii’s care.

“We have listened carefully to those concerns and we will work as quickly as we can to be able to give them the answers they need.

“Our investigation into Luchii’s care is ongoing and we will continue to involve his family as it progresses.

“A dedicated key worker is supporting Luchii’s family and we have referred Luchii’s death to the coroner.”

A South East Coast Ambulance Service spokeman added: “Our thoughts are with Ms Cooke and her family at this difficult time and we offer our sincere condolences.

“We will work with the hospital on their investigation and we are also carrying out our own investigation into the concerns raised by the family.”