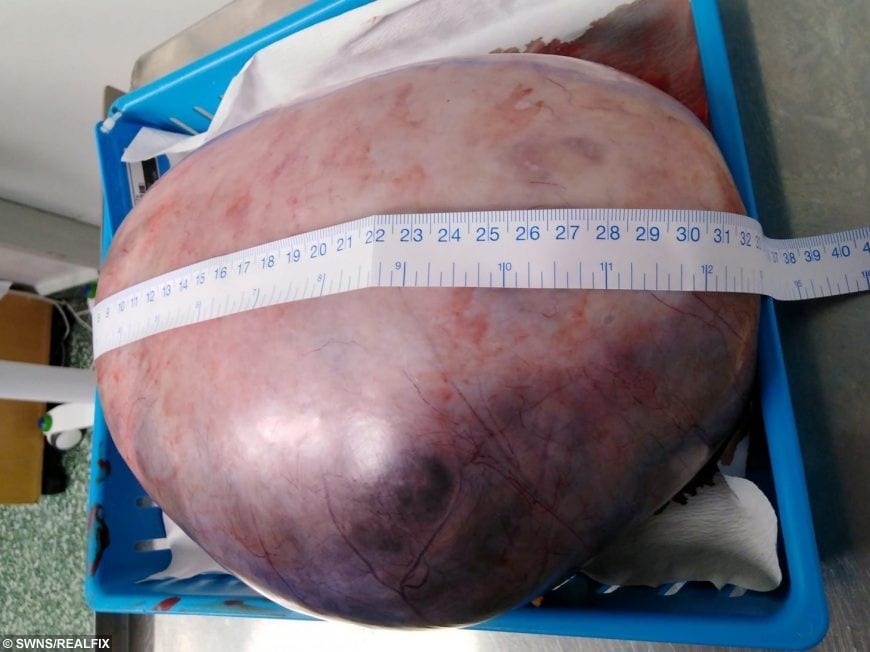 A woman has told how she “looked pregnant” before she had a huge tumour the size of a WATERMELON removed from her ovary.

Layla Cummins, 30, said the 10lb mass gave her a big belly and left her feeling exhausted and in pain.

Before the op, medics thought it would be around 20cm, but staggering photos show the 40cm wide mass in the operating theatre after it was removed from her right ovary.

Layla, a freelance writer from Bristol, only had symptoms for a few weeks before the mass was discovered.

She said: “I feel great now it has been taken out, I feel so much lighter.

“I weighed myself afterwards and I was 10lbs less heavy. It was absolutely massive.

“I looked pregnant before it was removed. My doctors were really shocked because up until that point they thought it was half that size.

“I couldn’t believe it when I saw how big it was, I was so shocked. I’m really pleased I asked for a photo to be taken.”

She says she noticed he stomach was swollen and tender, and her GP referred her for tests in January.

An ultrasound at Bristol’s St Michael’s Hospital revealed a mass – thought to be around 20cm in length – growing on her ovary.

“It was really uncomfortable,” she said.

“I couldn’t lay on my front at all.

“It felt like I had a remote control sticking in my side.

“I lost my appetite completely and just felt really heavy and tired a lot. I had bursts of pain but it wasn’t really painful at all.

“My stomach looked absolutely massive and I couldn’t wait to have it taken out.”

She had surgery on March 27, where doctors removed the mass and her right ovary and fallopian tube which had been damaged by the weight of the growth.

Tests revealed it wasn’t cancerous and she went home four days after being admitted.

Layla has been left with a huge scar on her stomach, said: “They put a lot of staples in my stomach but they will be taken out.

“Hopefully it heals fine. It doesn’t look great now but it will heal over time.

“I was given the all clear for things like cancer which was a relief. The tests came back as all clear.

“I still have one perfectly fine and functioning ovary.

“I have done my own research and it may take a bit longer for me to get pregnant, but I should still be able to.”

An ovarian cyst is a fluid-filled sac that are usually harmless and disappear without treatment.

But rare occurrences they grow large and need to be surgically removed.

Layla is expected to make a full recovery within the next couple of weeks and says the health scare has given her “motivation” to get active.

She said: “It has motivated me to get my ass into gear. I feel great now and like I want to do more.

“I feel like I’ve got more enthusiasm to try new things and be a bit more active.

“I haven’t exactly felt great with the cyst so I’m looking forward to getting back to normal.

“It’s funny because I was excited to have a medical anomaly. I had a natural curiosity and was really interested to see it.”