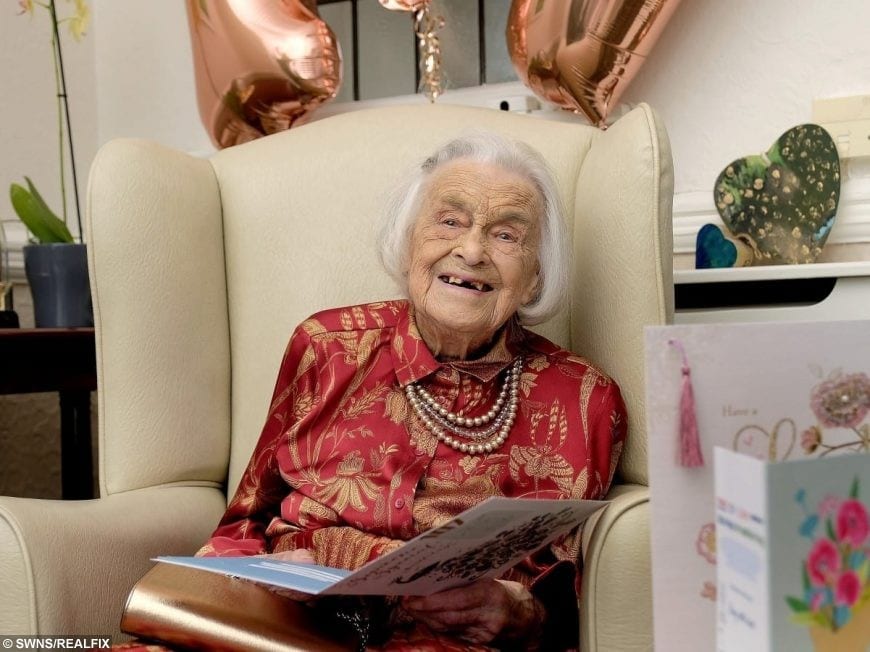 A sprightly spinster who has celebrated her 107th birthday has revealed the secret to her longevity – staying SINGLE.

Irene Green says she never got married because nobody asked her, but believes that has helped her live a long, happy life without “too many worries”.

The popular pensioner, affectionately known as Reeny, celebrated her 107th birthday on Wednesday (30/10/19) with cream tea and a party at the care home where she lives – and received a card from the Queen.

She was also treated to a new outfit and new perfume as staff helped her glam up for the party, which she described as one of the best days of her life and saw more than a dozen visitors help her celebrate.

Reeny said: “The answer to a long life is being happy, not being married, not having too many worries, good food and a good upbringing.

“I had some very good friends all my life.

“The party was one of the best days of my life.”

As well as never being married, Reeny credits her “long, happy and fulfilled” life to a good upbringing, good food, exercise and fresh air.

She was an avid hiker in her younger days and enjoyed canoeing, visiting dance halls and “getting up to mischief”.

While she now prefers a quieter life and enjoys naps and sitting in the garden, she still likes to have her hair and make-up done – and donned a new frock for the big occasion.

Reeny added: “When I was younger I liked getting into mischief, like most young people do.

“I liked going dancing at the Spa and the Olympia and I loved swimming and playing tennis.”

Born in 1912, the same year as the Titanic’s fateful maiden voyage, Reeny has lived through two world wars, four monarchs and 21 prime ministers.

She was the only child of Herbert, who worked on farms and served in World War One, and Florence, who managed boarding houses.

Reeny, who has lived in Scarborough, North Yorks., all her life, went on to police training college after school and later worked for the Home Office.

Staff at Dulverton House care home in the coastal resort helped her celebrate her special day with a tea party and treated Reeny to a new outfit for as she got herself glammed up.

Many of her visitors were children of her lifelong pals, who now class Reeny as a friend themselves.

Angela Webster, manager at the home, said: “The party was fantastic, it was a brilliant day.

“Reeny looked fabulous. She wanted a new party outfit and loves jewellery and a spritz of perfume.

“She’s very happy and likes to be glam and pampered.

“She had visitors all day and it really brought her to life.

“She knew everyone’s name and remembered their parents and she loved seeing them all.

“She was amazing, she was a proper party host and she was really happy.

“One of Reeny’s greatest enjoyments is her lifelong friendships.

“A lot of her friends’ children have become her friends over the years.

“She has such a fantastic positive outlook on life, even now. She just loves life and she is a very happy person.

“The other residents in the care home love her, they think she is amazing.”

Reeny added: “It was a very, very enjoyable party. I was very happy to see all my friends.

“We all had birthday cake, bubbly and chocolates.

“I was very pleased to have them at my party and I hope they all come to my party next year.”

« Previous post Mum Who Put Headaches Down To 'Baby Brain' Devastated When Doctors Discovered A Brain Tumour
Next article » Cleaner Won Two £500,000 Thunderball Jackpots In The Same Draw By MISTAKE