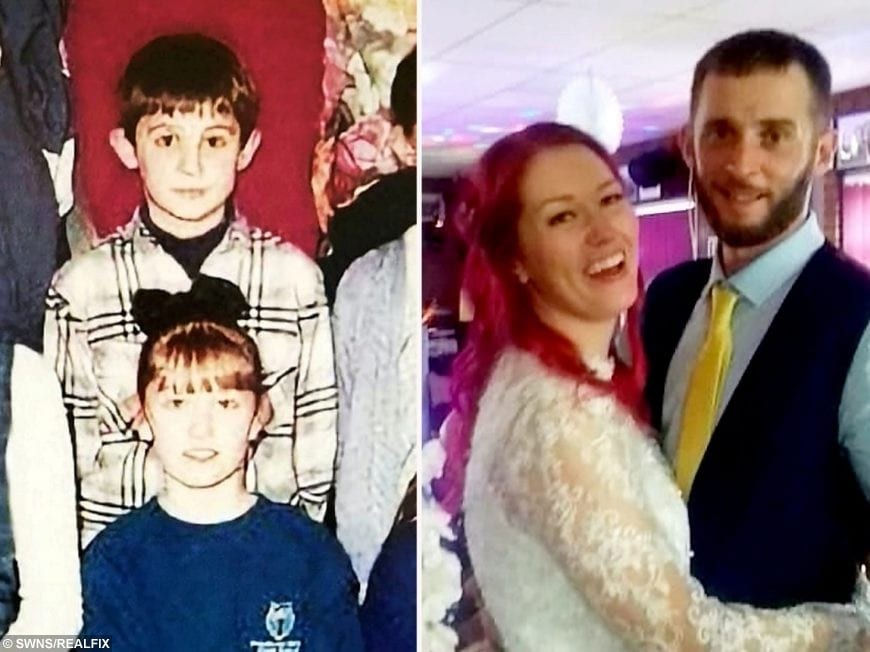 A besotted couple took a lesson in love when they got married in the primary SCHOOL where they first met as four-year-olds.

Jemma Fullthorpe and Phil Allen were classmates when they started school in 1992.

They were inseparable until Phil’s family moved to London and they ended up attending different secondary schools.

They got back in touch years later when Phil contacted Jemma on Facebook in 2009.

After years of chatting and eventually dating the pair decided to get married in the school where they first met 27 years ago.

Last Saturday (3/8) the pair tied the knot at Kingsthorpe Lower School in Northampton in front of 50 family and friends.

With the permission of the current headteacher, they said their vows in the school hall where they used to do PE classes.

Jemma, 31, who works in a solicitor’s office, said: “It was brilliant to get married where our story started.

“The hall is where I have my first memories of Phil.

“I remember him going to the top of the climbing apparatus to watch the other pupils doing PE. He refused to come down all lesson.

“He was a bit naughty and always cheeky. We had mutual friends at school and we used to play on the same green outside my parents’ house.

“When we left primary school we went to separate secondary schools. Phil moved away to London to be with his nan.

“At one point there was a school reunion and I was expecting him to come with our mutual friend Dale.

“When Dale walked in I was bricking it but Phil wasn’t there. He’d gone motorbiking. I was half disappointed and half nervous. I’d wanted to see him.

“He friend-requested me as soon as I got Facebook in 2009.

“Once he had a way of contacting me he kept trying for years. I was too scared to meet him.

“I wasn’t confident enough in myself to believe that he liked me in that way.

“I definitely believe in fate after what happened with Phil. Friends joke that he was a stalker.

“But I say he’s my guardian angel. He’s always been behind me like he was in that school photo. I never thought he would be interested in me.

“He’d pop up now and again and ask if I wanted to walk the dogs or go for lunch.

“He used to walk with his dogs past the solicitor’s office where I worked and wave at me.

“I finally decided to meet him when I was back home for a few days. My ex-partner had just kicked me out and I was feeling very down.

“I posted a Facebook status saying ‘It’s just me at home with the dogs.’ It was a low point.

“He commented straight away and invited me out for a walk on the green where we used to play.

“After that we saw each other every day and as Phil says I have never left.”

Phil, 32, a tree surgeon, proposed in 2017 by hiding a ring in a Kinder surprise egg along with instructions which read “will you marry me?”

The couple now live across the road from their old primary school in Northampton.

Phil said: “The school brought us together and we were delighted to be able to have our wedding there.

“It brought back loads of memories and was the perfect day.”