A brave fitness fanatic whose crippling anorexia left her weighing less than five stone has spoken about turning her life around – and becoming a personal trainer.

Mhairi Stewart’s weight plummeted after she left school, where she was subjected to a torment of bullying for her sporty nature and slender frame.

The 22-year-old said she spent hours in the gym and walked at least 10km every day until she was admitted to hospital in 2015 when she weighed just 5st 5lbs.

But now Mhairi has turned her life around, becoming a successful personal trainer and is even set to compete in weightlifting competitions later this year. 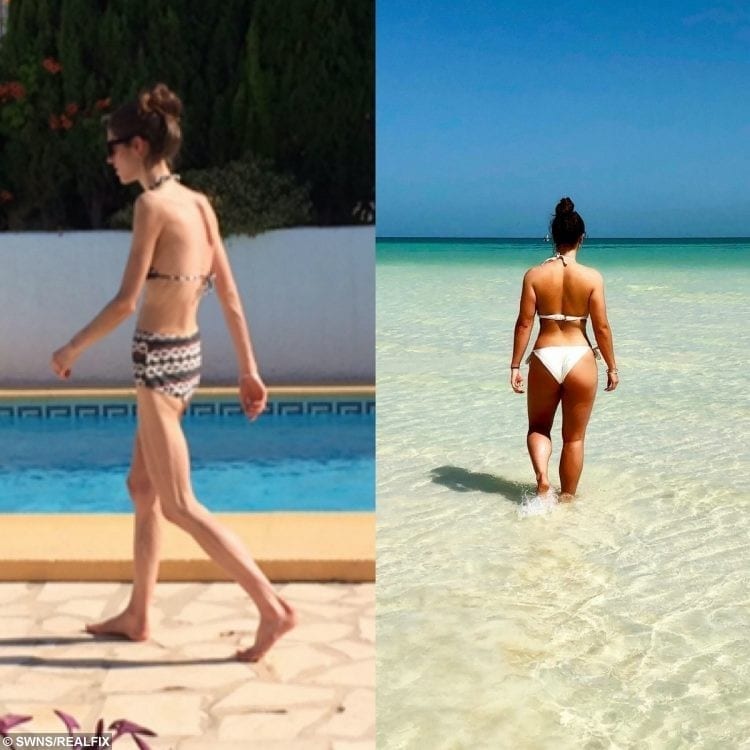 The inspirational PT said: “It started when I was leaving school.

“I had always been bullied because I was sporty and skinny.

“I was the odd one out and I got picked on a lot which meant my self-esteem was really low.

“I didn’t know what I wanted to do with my life and my grandad, who I was really close to, had died.

“There was a lot of external pressure and the only thing I could control was what I was eating and exercising.” 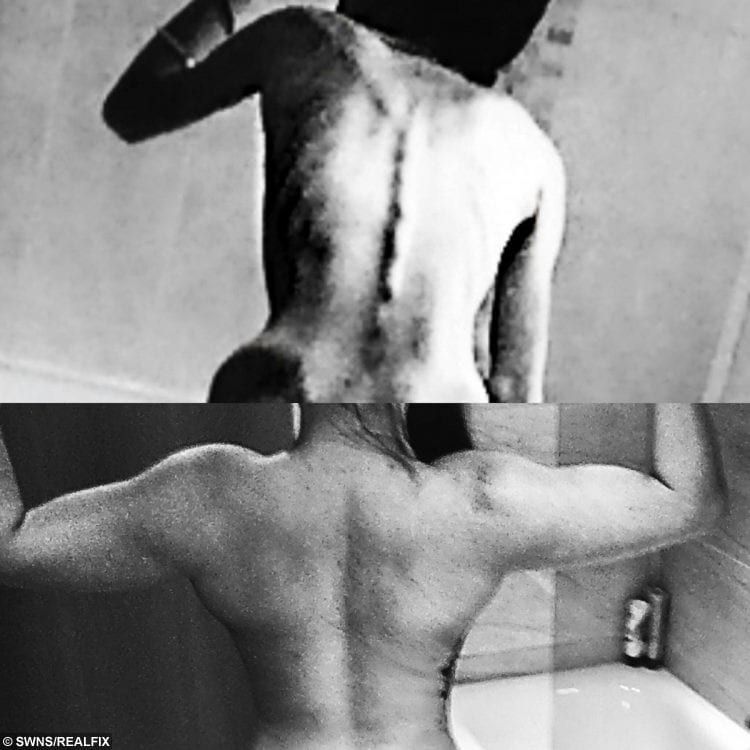 Mhairi, from Glasgow, said she was so obsessed she would spend up to eight hours a day exercising and eat between 300 and 500 calories a day.

She said: “When I left school I became a make-up artist and I was surrounded by these girls who all looked amazing and I just wanted to be as thin as I could.

“I never saw it happening to me.

“I was so enthralled in the gym – I loved it and I just got worse and worse.

“I was in the gym seven days a week for six to eight hours and getting up at 5am so I could make sure I go.

“And I was walking 10km a day and lifting weights for four hours a day.

“It was so controlling, it was like I didn’t have a choice, I had to do it.

“I was so emaciated and just a shell – there was nothing behind my eyes.” 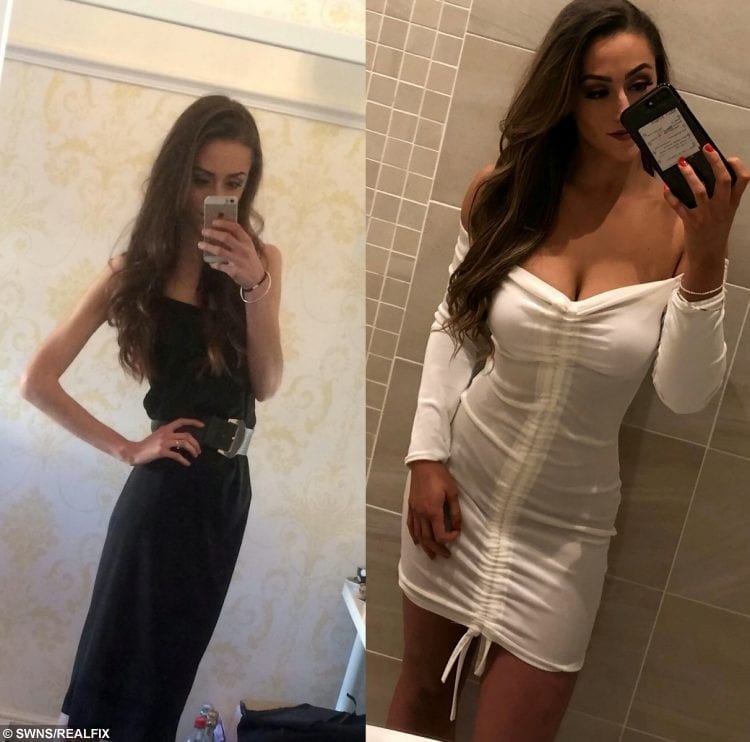 Mhairi would eat 20g of porridge in the morning, a protein shake, an apple, and egg whites and a salad for dinner.

She wore a heart monitor every day and began wearing baggy clothes to hide how thin she was when other people began commenting on her weight.

Mhairi said: “My family tried to help me, to help me see what I was doing to myself.

“But it didn’t matter what anyone said to me, I had made my choice and that was what I was going to do.

“I couldn’t understand why everyone was so focussed on me and I was wearing baggier and baggier clothes to disguise how thin I really was.

“I was horrible – I was not a nice person during that time, I was so nasty.”

The breaking point came in 2015 when 5ft 9inch Mhairi was referred to an adult eating disorder clinic. 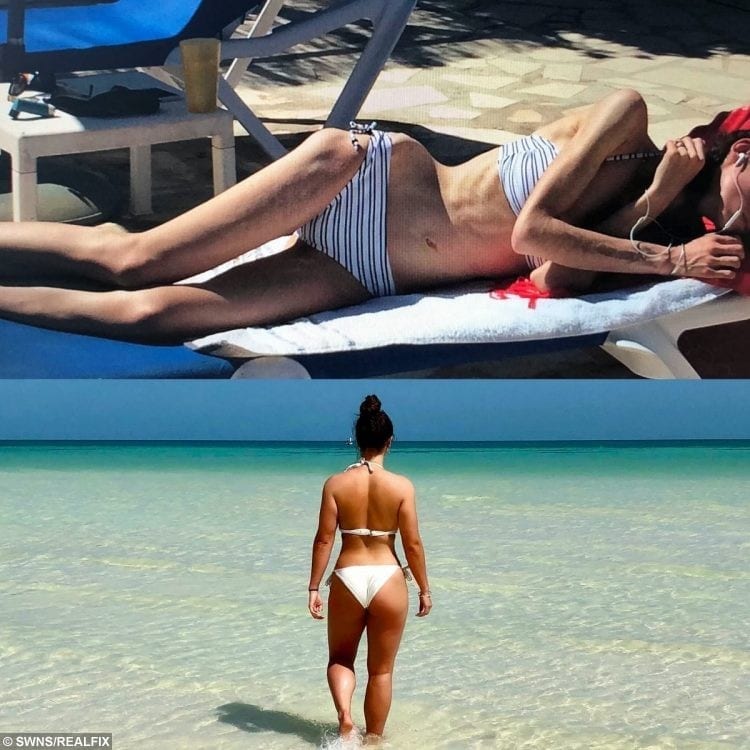 Her BMI had dropped to 12 when it should have been above 15, and she was admitted to Gartnavel Hospital, Glasgow – where she spent four weeks.

Mhairi knew she had to try and get better and by 2016, after completing an HND in health and fitness, she got a job as a personal trainer.

She said: “I decided I wanted to get better and that I never wanted to go back to the hospital or be in that situation again.

“I hired a coach who helped me with my food management who got me to 55kg, which at the time I found really hard because I didn’t like seeing my body that way.

“But I started to know the warning signs and I knew how to deal with those feelings.”

Mhairi, who owns her own business called Mrs PT, is now a healthy 10st 2lbs.

And with the help of her ­weightlifting boyfriend Adam, 26, Mhairi’s strength has improved so much that she’s heading to Physical Culture Association ­competitions.

In May 2016, Mhairi posted her first shocking before-and-after pictures showing her body’s transformation over the past couple of years.

The pictures have inspired lots of her followers on social media but Mhairi says seeing the ‘before’ pictures don’t shock her the way they do others. 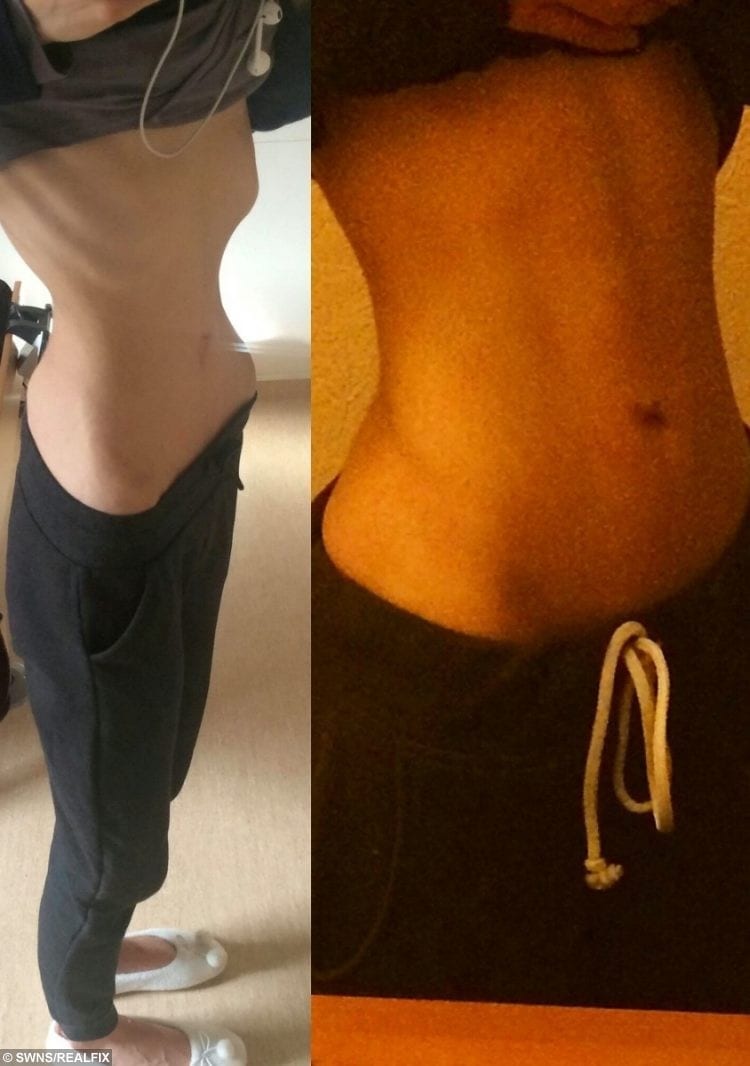 She said: “I will never fully be over my anorexia mentally, but physically I am recovering.

“Now I am training for my competition in May I am eating around 1,700 calories a day.

“For breakfast, I have two eggs, four egg whites and two Weetabix with almond milk.