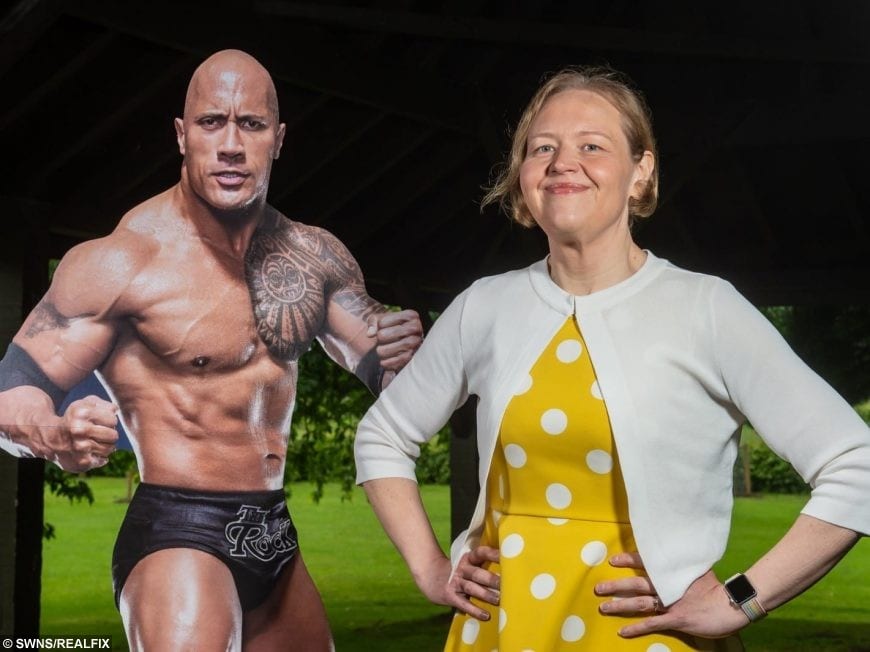 A movie fan is enjoying the lighter things in life after losing the equivalent amount of weight as Hollywood superstar The Rock who weighs in at 19 stone.

Sarah Arnold struggled to get around as her excess weight was like walking with the heavyweight 6ft 5ins former WWF wrestler on her back.

Now the 40-year-old is astounded by the more simple things like being able to sit on a normal seat at the cinema and going out in public without being pointed at.

Sarah said: “I was basically a hermit as I couldn’t walk very far, which is not surprising, seeing as it was like giving Dwayne Johnson a piggy back.”

The NHS support worker dropped from 30 stones 1lb to 11 stone 13lbs over three years and has now maintained her weight for a year by following the Weight Watchers’ diet.

The movie buff said: “I basically had every kind of chaotic eating disorder you can imagine, I was a binge eater and a grazer so I would constantly be eating.

“For dinner I would have huge bowls of pasta.

“I would have at least three chocolate bars in one sitting and could easily get myself through a six-pack of crisps.

“I would always have to walk the long way around a car park, I couldn’t fit between cars.

“I would turn up to any work meetings early so I could select the right chair, I could not sit on one with arms.

“If I went to the cinema, it would be at a late showing so there were very little people there, and we’d pay for the expensive big seats.

“I can now go when I like and sit in a regular seat.

“I can fit into size eight clothes – I have never been a size eight. I went from kids’ clothes straight into big ladies’ sizes.”

Sarah was a little overweight as a child and when her dad had a stroke when she was seven-years-old she would spend a lot of time with her grandparents.

She would go with them to the caravan at the seaside every weekend eating fish and chips and sharing in her grandad’s love of Mars Bars.

By the time Sarah, from Birmingham, West Mids., hit her teens she was wearing size 14-16 sized clothes.

Sarah said: “It’s strange because you almost don’t realise the weight is piling on as you get older and then before you know it, you are so big that the depression cycle sets in and you’re stuck.”

Sarah, who lives with her 11 and-a-half stone partner of 19 years, service engineer Karl Garraty, also 40, said: “I had tried every diet you can think of and I never stuck to them.”

But in April 2015 after deciding to follow the Slimming World diet, something clicked.

Sarah said: “I would quite often blame others for the food I was eating, thinking that I’d had that cake because somebody had made it, or I’d had this takeaway because it was Karl’s idea.

“Karl said to me I had to remember that I was responsible for what I was putting in my mouth. Nobody can choose what you eat apart from you.

“Straight away I decided I would totally cut out crisps, cake and chocolate.”

She said: “I was still eating huge bowls of pasta, which, although allowed on the diet, I didn’t feel was what I wanted to continue eating.”

She looked around for alternative diets and landed upon Weight Watchers – who have since rebranded themselves as WW.

“For the first time in eight months I ate a MacDonalds breakfast and I was allowed to eat it.

“As I was losing weight I wanted to go out more and enjoy my life. I needed to adjust my healthy eating to fit around this life, and I found this worked better.

“I had been living the last few years of my life as a hermit, apart from going out to work I didn’t dare go out because I would be stared at – once someone even took a picture of me.”

Sarah now has a breakfast of toast, with a chicken korma for lunch, made from scratch with unsweetened coconut milk, and WW’s staple baked oats for dinner.

Sarah said: “I am so delighted that I now blend in, all I wanted was to go about my day anonymously.”

Sarah reached her goal in April this year and celebrated with joining a gym.

She now swims between five or seven days a week and will often achieve at least 10,000 steps a day.

Sarah’s biggest tip she can offer if you have a lot to lose is to just keep going.

Sarah said: “During my weight loss I had three plateaus where the weight loss would stop, but in this time, although not losing weight, I did notice my body was changing – in this time I’d quite often go down a dress size.

“Persevere and your weight loss will get moving again.”