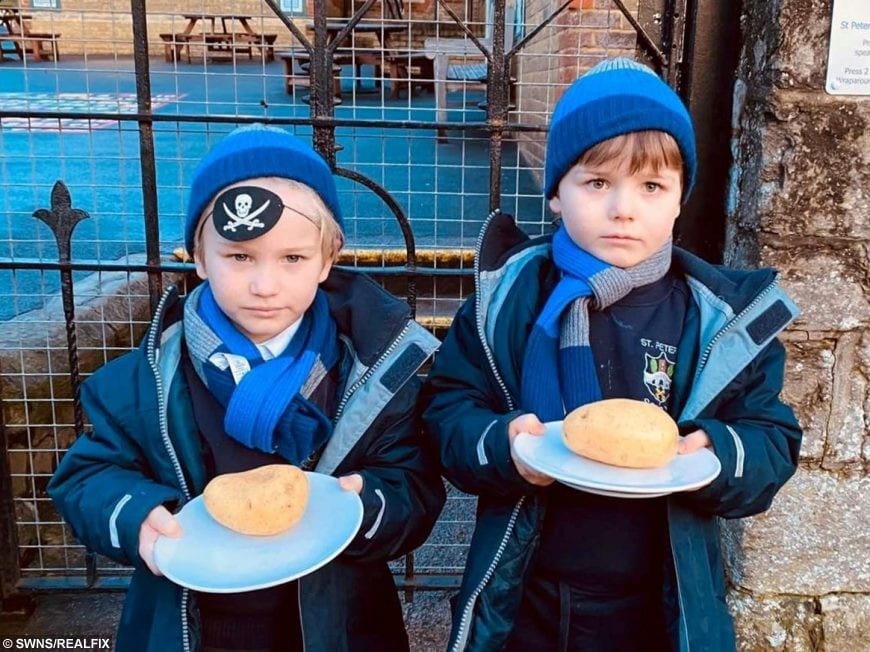 A fuming father has lashed out at a primary school for serving his two boys plain jacket potatoes for lunch every day – because they have allergies.

Jorg Braese’s two sons, four-year-old Alvin and Victor, five, have allergies to gluten and egg white, but only have boring spuds to look forwards to at dinner time, thanks to their school’s new catering company.

Their father, who runs a food wholesaler, has criticised the catering company contracted by St Peter’s Primary School in Aylesford, Kent for not accommodating his boys’ needs.

Victor started at the school in 2018 and, during his first year there, experienced were no issues with the food – which catered to his gluten intolerance.

But since Alvin, who has an egg white allergy, joined at the start of this school year, the boys have had issues.

The catering firm – The Contract Dining Company – changed the school dinner menu in September and, since then, the problems have started to mount.

Jorg, 56, said: “We filled in these allergy forms before school started, but then when term began they just got given baked potatoes.

“It was fine in the first week but then we started to get nervous, especially our boys.

“They seem to be incompetent to give the children what they should be entitled to by law.”

The pair’s furious father complained to the school and, three or four weeks later, Victor and Alvin were given alternative menu options.

But then in January, when school restarted after Christmas, it happened again.

Jorg added: “As of yesterday, they’ve just been served baked potatoes since then.”

After complaining to the company and raising it with the headteacher, they were given an allergen menu last week which they agreed to but when the boys sat down for lunch yesterday they were given the same meal again.

The dad-of-two said: “We don’t understand why it is happening again. It’s frustrating, and it hurts so much to see our boys suffering.

“They are really sad. They don’t want to go to school, and the other boys are always laughing at them. It’s such a shame, because they always loved going to school.

“We have spoken to the school and they have promised to do something about it, but still they keep getting the same baked potatoes every meal.

“I’m from Germany, and I’ve lived in the UK for ten years. I’m the director of a food wholesaler, and my wife is a medical researcher.

“She does a lot of research about food, so we try to give them the right food at home – lots of fruit and veg – but their school keeps letting us down.”

Jorg said he isn’t aware if there are other children at the school enduring the same difficulties, but hopes his intervention will encourage other parents to speak out.

« Previous post 'Give Us A Break!' - Disabled Women Who Can Barely Speak Has Had Her Benefits Cut After Government Deemed Her "Fit To Work"
Next article » 'It's A Ticking Time-Bomb' - Mum Desperate To Find Cure For Daughter Who Is The Only Person In The UK With Rare Disease