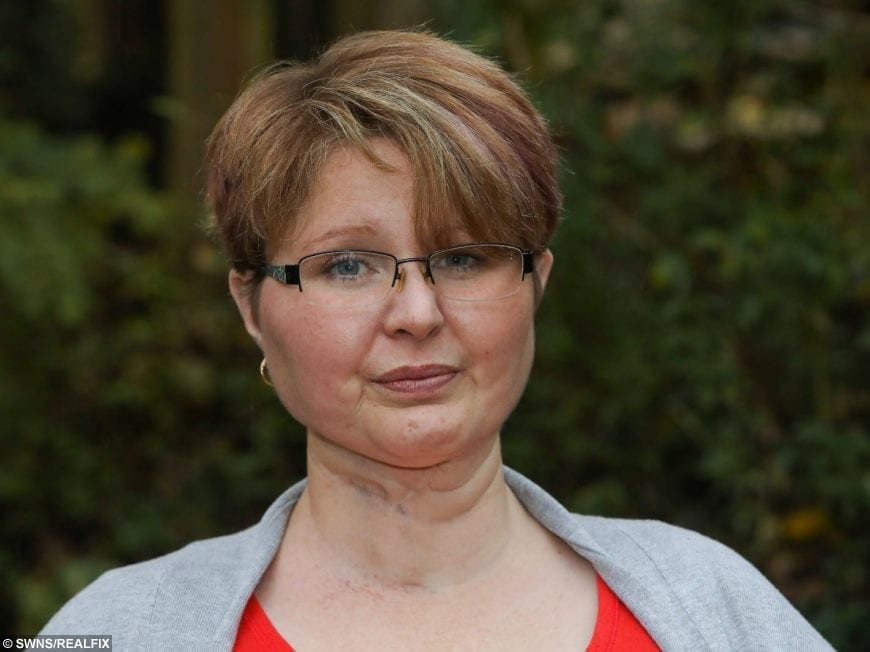 A mum who had to have her tongue removed to fight cancer has told how she got a new one — made from her ARM.

Stephanie Wigglesworth, 36, was diagnosed with Squamous Cell Carcinoma after noticing a tiny ulcer on her tongue which started to tingle before becoming numb.

She underwent a six-four procedure where surgeons cut through her neck, sliced her tongue straight down the middle and removed half of it.

They constructed a new one using skin, muscle and a long vein from her left arm.

The PA now has to be fed through a tube in her throat, and can’t talk as easily as before, but is cancer free – and able to enjoy a cup of tea.

Stephanie, from Aylesbury, Buckinghamshire, said: “The surgery was long and I was exhausted when I finally woke up.

“My arm, where the skin was removed, hurt more than my mouth, which I couldn’t believe.

“All my friends and family know I’m a positive person.

“When you get cancer, it’s like you’re being forced into a club that you don’t want to join.

Stephanie had a reoccurring ulcer on her tongue, but she ignored it until it started tingling and feeling numb in January, 2013.

She had also been suffering from painful migraines.

After taking herself off to bed early one day from the pain, she knew she had to visit her GP.

She said: “I went to my out of hours doctor in February 2013 and I was originally told that I was suffering from Transient ischemic attack (TIA) which is like a stroke.

“I went straight to hospital where I had lots of scans, but they came back as inconclusive.

“I was sent home as they didn’t see anything suspicious, but I wasn’t happy.”

She Goggled her symptoms at home and was guided to pages about tongue cancer.

“It sounded like I might have it and I read that the survival rate was as low as 50 percent – it was the final straw,” she said.

“I called my neurologist and insisted that I was checked over.”

She had a biopsy and feared the worst when she was called into Peterborough Hospital to receive the results.

Despite the most common demographic for those suffering from mouth cancer being men over 45, Stephanie was told she had the disease when she was just 30.

Stephanie said: “I knew it was really bad because they insisted my husband Gary, 40, and my kids, Kieran, 14, and Daisy, eight, come into the room with me.

“When the doctor told me I had mouth cancer all I heard was white noise.

“I just knew, I had a gut feeling that I had cancer. And I was right.

‘I still have nightmares about it.

“I was a smoker so I felt like I deserved it, but I just wanted to stick around for my children to remember me.

“As soon as the doctor mentioned the word cancer, I told him not to say anymore until my kids were out of the room. I didn’t want them to be there for that.”

Doctors decided the best course of action was to remove the cancerous part of Stephanie’s tongue, on May 16, 2013.

Stephanie had a neck dissection – she was cut from her chin to her neck, and then around to her left ear – to give doctors access to her mouth and throat.

A large section of skin was removed from Stephanie’s left forearm and used to recreate a new tongue.

A vein was also removed from her arm, to ensure her tongue could move.

She said: “I woke up with a breathing tube and I still have nightmares about that.

“The sensation of my body breathing, whilst I wasn’t actually breathing was terrifying and surreal.

“I remember waking up and feeling my breathing tube being pulled at – that still haunts me to this day.”

Six days later the breathing tube was removed and 40 staples were put into Stephanie’s neck.

Gary’s work in the military permitted him compassionate leave, meaning he could stay at home with Stephanie and help her on the road to recovery.

“We told Kieran that his mummy had cancer, but that it wasn’t going to kill me, it just needed to be taken away,” she said.

“Luckily Daisy was so young that she didn’t understand anything except from ‘Mumma’s got an ouchie’,” she said.

A check-up scan detected the cancer had spread to lymph nodes in her throat.

She had to have 35 sessions of radiotherapy – every day for six weeks.

She said: “It was a real blow.

“The first few sessions were fine, but after a while I was exhausted.

“My friends and Gary took it in turns to drive me to the hospital, while I just collapsed in the back of the car, wrapped in a duvet.”

Stephanie lost her voice, and lives with croaky speech, which means it is hard for her to speak on the phone.

Despite her tough journey and the painful procedures she has undergone, Stephanie stays positive.

She can drink, and has continued drinking cups of tea throughout the whole process.

“I miss all of the lovely food we used to eat as a family – steaks and sandwiches.

“I’m a really positive person, so although the treatment was difficult, I’ve come out smiling and grateful.”

Stephanie writes a blog entitled ‘My Cancer and Me’.

« Previous post 'Every Morning She Reacts Like It’s A Completely New Experience' - Adorable Deaf Baby Smiles From Cheek-To-Cheek When Hearing Aid Is Switched On
Next article » How Does a Pet Tracker Work?