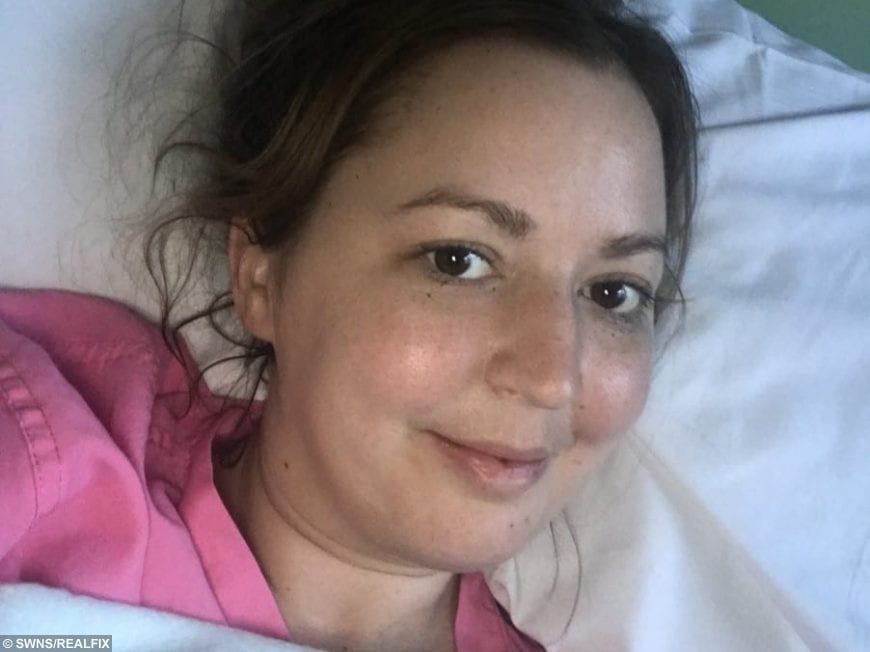 A woman almost lost her leg after banging it against a baby gate and developing a flesh-eating bug which ravaged the limb and left her in a coma.

Sophie Mason, 34, tripped and hit her right thigh against a metal stair gate, but she ignored the bruise on her leg until it started burning, oozing with puss and she began throwing up days later.

She was rushed to Salford Royal Hospital, Greater Manchester, on December 27th – two days after the accident – and was placed in an induced coma as an infection had caused her organs to start to shut down.

Doctors discovered the bang had triggered Necrotizing fasciitis (NF) – a flesh-eating disease which results in the death of parts of the body’s soft tissue.

During eight weeks in hospital – a week of which Sophie spent in a coma – medics scraped the infection out of the wound, used a vacuum machine to clean it and performed a skin graft.

Sophie has since made an incredible recovery and is back at home in Eccles, Manchester.

The mum-of-one – who cares for her autistic six-year-old son Max – said: “A little knock to my leg almost resulted in me losing my whole limb.

“It’s terrifying to think that it caused a flesh-eating bug which could have killed me, but I’m thankful that I’m still here today.

“Despite the damage the disease as caused, I feel lucky that I survived it and I’m still around to look after my little boy.”

Sophie was walking upstairs with a pile of clean laundry when she tripped and hit her leg – triggering the condition.

“My sister, Sara, 39, was coming over from Australia – where she lives – with her kids for the festive season.

“I was going upstairs to put my son’s Christmas bedding on when I tripped on the duvet and banged my leg on the baby gate.

“It didn’t cut the skin, it was just a bang, but it did hurt.

“As it wasn’t overly painful, I just carried on and didn’t give it a second thought.”

But soon after the incident, Sophie started feeling unwell.

She said: “From then on I was being sick. I was really poorly.

“I just thought I had a bug and had come down with something.

“It was terrible timing as my sister had flown half way around the world with her three kids to spend Christmas with us and I was so sick.

“On Christmas Day I couldn’t even stand up and I spent all day in a separate room to my family.

But things quickly went from bad to worse and Sophie was rushed to Salford Royal Hospital, Greater Manchester, the day after Boxing Day.

Sophie said: “I eventually realised I had to go to hospital.

“I was going to phone an ambulance, but my friend rushed me there.

“I was seen by doctors straight away as I was in such a bad state. I was delirious, everything was a bit of a blur. I was told my organs were shutting down.

“Medics were trying to put canulas in me and all swarming around me, but I was so out of it I thought I was on the TV programme Casualty.

“I thought they were all actors, that’s how deluded I was.

“To stablise me they had to put me in an induced coma – which I stayed in for a week.”

Sophie’s family all rushed to be by her side.

She said: “My mum, Viv, 64, and my dad had my little boy, Max, until his dad picked him up and then they dashed to the hospital.

“It was such a shame as they’d paid for my sister, Sara, to come over to the UK to spend a couple of weeks with us, but I was so out of it I only got to see her twice.

“Sara lives in Perth, Australia, and we don’t see each other very much. We hadn’t been together for two years so the timing was awful.

“She came to the hospital too.”

Doctors performed tests and eventually discovered Sophie had developed NF – a severe flesh-eating disease which spreads rapidly. Typically, the infection enters the body through a break in the skin such as a cut or burn.

Sophie said: “At first they didn’t know what was wrong because what I had was so rare.

“Due to my age and the fact I was fit and healthy, I seemed to baffle doctors for a while.

“It was only when the flesh-eating bug started eating away at my skin on my thigh on my right leg that they identified what it was.

“What started as a bruise became bright red and dead hot when I first became poorly.

“Then it turned yellow, soft and was oozing with puss.

“Doctors knew it was an infection of some kind after they looked at my leg and my wound started spreading.

“Weeks before I had cut my toe, they realised I might have had it for weeks and the bang just made it active.

“I had been at a charity event at the local rugby club and had cut my feet after wearing heels as the bar had rubbed away at my skin because they were new.

“It was painful, but I didn’t think anything of it at the time.”

Sophie had to have the wound cleaned before she could undergo a skin graft procedure.

She said: “Where the infection was I had the skin removed from the area, my flesh was scrubbed down and the wound was quite deep.

“Thankfully it missed the muscle.

“It was an open wound so I had to have a vac machine on it for six weeks to help clear it.”

Sophie developed sepsis – a life-threatening condition triggered by the infection – which meant doctors had to hold off on the skin graft until she recovered from it.

Sophie said: “When I woke up from the coma I was hallucinating.

“My friend came to visit when I was out of ICU and on another ward.

“She said: ‘Oh my god, only one in four survive what you’ve had’.

“I laughed and asked my mum: ‘What’s wrong with me then?’

“She had to tell me, I just thought I’d had sepsis, I didn’t realise I’d been battling a life-threatening flesh-eating bug.

“I had been told a few times, but I’d been so out of it I couldn’t retain the information.

“It was a real shock when I first saw my leg.

“I didn’t look at it for ages as I couldn’t face it.

“But when they told me they nearly had to take it off, I just thought: ‘It’s better than having it amputated’.

“I worried I’d never be able to walk again and started panicking, worrying how I’d take my son to school and run around after him.”

Thankfully Sophie has made an incredible recovery.

She said: “I was in hospital for eight weeks.

“I couldn’t have a skin graft straight away because I ended up with sepsis.

“They moved me to Wythinshaw Hospital – which is a specialist hospital specialising in burns and plastic surgery.

“They were treating me like a burns victim because of how bad my injuries were.

“They took a skin graft from the back of my right thigh in an operation which took two hours.

“Every time I had the wound cleaned – twice a week – I had to go under general anesthetic as it was too painful to have done while I was awake.”

She added: “My little boy, Max, six, is autistic and he didn’t quite understand that I was in hospital.

“He went between my mum and dad and his dad whilst I was poorly.

“He didn’t know why I’d gone and he wasn’t allowed to visit me as I was so unwell.

“I didn’t see him for six weeks which was really hard.”

Sophie was discharged in February, but had to still go back to the hospital every two days to have the bandages on her leg changed.

She said: “I couldn’t stand up. I had to have physio with crutches and learn how to walk again.

“I can walk now, but at first I couldn’t even get out of a chair.

“It’s been really tough. It was absolutely awful, but I just kept a picture of my son with me and kept saying to myself: ‘I’ve got to get home to him’.

“I tried to be as positive as I could be.

“All the doctors were saying: ‘You can have cosmetic surgery in a few months’ as my leg is absolutely ruined, but now I don’t care as long as I’m alive.

“I’m really pleased with my progress, I feel like I’ve bounced back.”