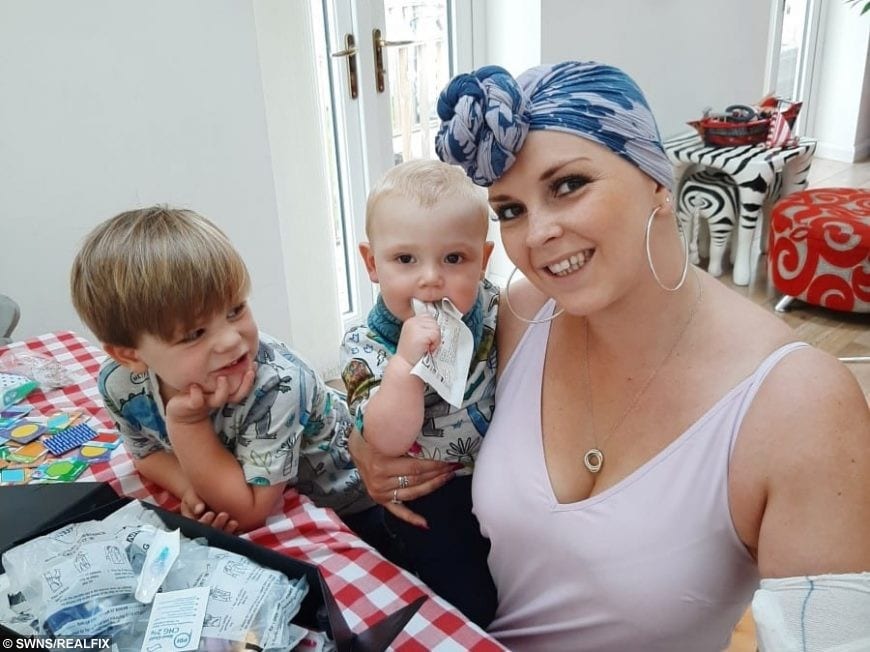 A young mum says her new baby could have saved her life after she discovered a cancerous lump – while breastfeeding.

Amy Palmer, 30, made the shocking discovery of a lump on her breast while feeding her five-month-old son Lenny.

Initially doctors said it was probably a blocked milk duct, but further tests confirmed her worst fears – she had breast cancer.

Both Amy and her husband Colin burst out in tears when they were told, and the news left her family and friends devastated.

And after undergoing several bouts of intensive treatment over the last few months, Amy is now warning other mothers of the importance of carrying out checks while they are breastfeeding.

Amy, who lives in Paignton, Devon, with husband Colin and her two young children Lenny, now one, and Frankie, four, said of her diagnosis: “It was a shock, just a complete shock.

“You never think anything like this is going to happen to you, until it does. It hit my husband really hard.”

While breastfeeding Lenny – and just days after running a half marathon – Amy said she found the lump in her breast and went to the doctors to see what it was.

She added: “Initially they said it was probably just a blocked milk duct, but they gave me another appointment for two weeks time just to see if it was still there.

“It was. They still weren’t concerned but put me forward for some tests including an ultrasound and a biopsy. They said it was most likely to be a cist.

“When the results came back, they called me and asked me to come to the hospital that afternoon – I knew exactly what they were going to say.”

When Amy and Colin heard the news they both burst into tears in the doctor’s office.

Amy has now been through an intensive course of treatments including a lumpectomy, six rounds of chemotherapy and 18 rounds of radiotherapy.

While treatment has been successful she has now created a bucket list of things she wants to do to live life to the full.

During a catch up with her friend Roxanne Hancox, they started talking about all the things Amy wanted to tick off her bucket list.

Friend Roxanne Hancox decided to set up a GoFundMe crowdfunding page to help her complete some of the experiences.

These included taking part in the Disney Princess ‘Run to the Magic’ race, doing a skydive, entering the London Marathon and visiting New York.

Roxanne said: “Although her treatment has gone well, this will affect her for life – she will have to have ongoing treatment and is already having regular injections.

“It just goes to show that this can happen to anyone of any age, it’s not just older people it affects.

“Having watched this family go through a rollercoaster of a year, I would love nothing more than to help her tick off a few things from this list.”

Amy also wants to encourage women of all ages to check their breasts regularly and also believes the age of mammogram testing should be lowered.

In the UK, women aged 50 to 71 are invited for NHS breast screenings every three years.

She added: “I don’t know why the start age is so low, as my case proves this happens to people of all ages.

“I’d like to see anyone over the age of 18 offered screenings.

“Since my diagnosis, I’ve seen women in their 20s diagnosed with breast cancer. Screening early could only save lives.”

You can donate by visiting www.gofundme.com/f/amys-bucket-list