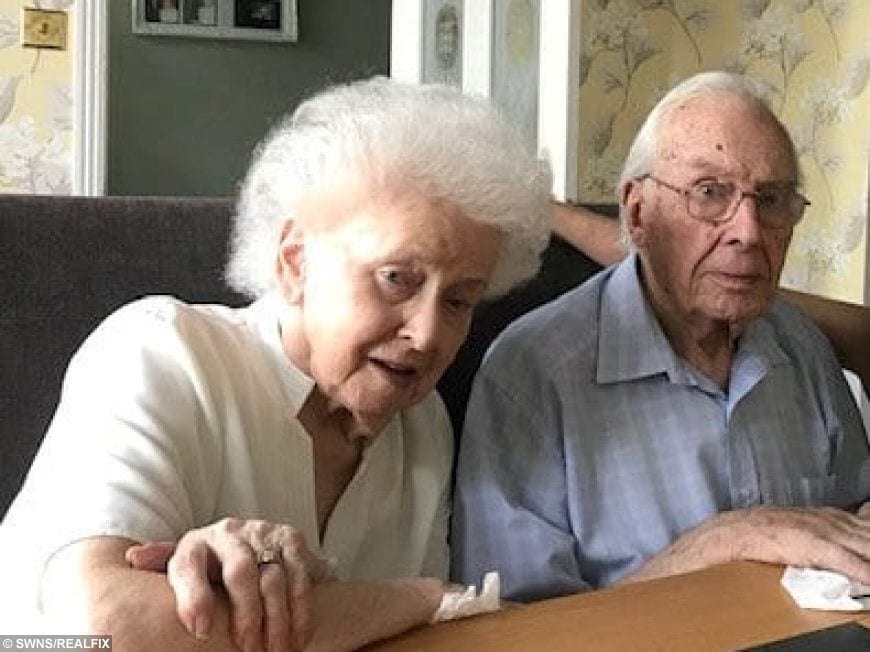 A heartbroken widow “died of a broken heart” just four days after her husband of 68 years passed away, her family say.

Les and Audrey Pettitt were devoted to each other for seven decades and “never spent a day apart”, according to loved ones.

Audrey became friends with her future husband’s sister Jean after the pair began working together as sales assistants in the fashion section of a department store.

And after setting eyes on the pretty 19-year-old sales assistant, Les vowed to get himself a date with Audrey and the rest is history.

Sadly, Les died on July 10 at the age of 93 and his wife who “couldn’t be without him.”
passed away four days later at the age 91.

Les had deep vein thrombosis which spread to his lungs – and Audrey died of heart failure.

Their niece, Janice Curran, described watching the soulmates from Ipswich in Suffolk with admiration and said that they “never spent a day apart.”

She said: “She was lost without him. When he was in hospital for a short time she was completely lost. They were always together, they never spent a day apart.

“Audrey had other health problems and I never knew her to have heart problems. I think in a way she did die of a broken heart.

“Their relationship was lovely, they always looked so happy.

“I remember he was quite jovial and she was quite reserved but they suited each other well.”

The couple first met when Les’ sister Jean and Audrey began working together at the department store Frederick Corder & Son when they were both about 19.

Les would sometimes pick up his sister from work until he came up with a genius plan.

Janice explained: “He told Jean he would only take her back if she got him a date with Audrey and that’s how they met!”

At 17, Les joined the Fleet Air Arm and went onto go to Canada to carry out his flight training- but back in England he was dealt a devastating blow.

He had developed pleurisy and was put in a hospital ward where some patients had TB and the family suspect he too developed TB and lost a kidney as a result.

Les then worked in garages before becoming partners in a highly successful garage.

Some time after meeting, Audrey and Les married in June 1951 and built their perfect home after purchasing a plot of land.

As they grew older however, they began experiencing health problems and they moved closer to their family.

Janice said: “When they died and we were going through their stuff we found so many joke books. There were books and cuttings from papers and magazines with jokes on.

“I used to visit with with my children and my uncle would always say: ‘Do you wanna hear a joke?’ He couldn’t wait to tell you his new one.

“My auntie was more reserved. She knew what she liked, she had quite high standards but she was a lovely, kind lady.

“They couldn’t have children so I think they struggled with that watching their siblings have a family and children but they had nieces and nephews that they adored.”

“I just think after 68 years, a tribute to them is something they deserve. They’ve been through so much but they endured and I think it’s lovely.

“I always called them my second mum and dad.

“We’re happy that they’re together again.”

« Previous post Cops Cop £8,000 Vet's Bill After Cat Was Fatally Savaged By Police Dog
Next article » Disabled Woman Whose Cat HEADBUTTS Her When She Is Going Into Spasm Wants Legal Recognition For Emotional Support Animals