HomeGeneralHealthTop Stories‘Nice To See You, Roadkill’ – Parents Outraged After Teacher Nicknames Their Son Who Was Left Disabled In Horror Crash “Roadkill” 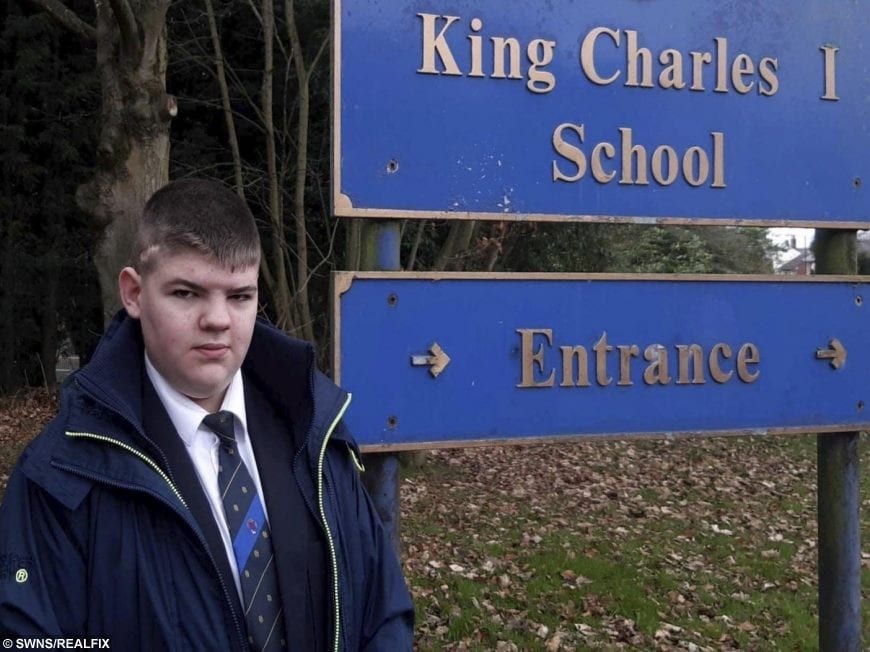 The parents of a 14-year-old boy who was left disabled in a car crash were left outraged after a school teacher nicknamed their son ROADKILL.

Rhys Jones was left “distressed and upset” after his teacher Brian Jefferson made the offensive comments to him as he arrived for class.

The teenager, who was involved in a life-changing road accident when he was eight, said he was gobsmacked to be greeted with: “Nice to see you, roadkill”.

Parents Laura and Garreth say they are fuming after Mr Jefferson was allowed to keep his job at King Charles I School, in Kidderminster, Worcs.

Mrs Jones said: “We couldn’t believe that he kept his job. You would be angry if a student had said that to him, but you expect better from a teacher.

“We both made it clear that we wanted this teacher dismissed.We did not want him anywhere near Rhys, let alone teach him.

“As parents we want to protect Rhys’ emotional and mental wellbeing. Every day since, I have had Rhys come home from school upset and distressed.

“I have had Rhys go from being very open about his medical issues to extremely closed.”

The family said they received a call from the school to say Rhys was experiencing pain during a Race for Life fundraiser in July last year.

After taking the next day off, he returned on Monday, July 15, when he was told by friends on the Friday Mr Jefferson had asked the class: “Where is roadkill today?”

Mrs Jones says that Rhys was greeted that Monday morning by the same teacher, who said: “Nice to see you roadkill”.

She added: “On that Monday, Rhys came home and was very quiet. After about an hour he told me what had happened.

“I was extremely upset that this teacher, the person I trust to support, help and encourage my child to do his best, chose to make this comment.”

In October 2013, Rhys was hit head-on by a van, thrown into the air and run over before being dragged down the road by the vehicle.

He was taken by air ambulance to Birmingham Children’s Hospital, where his parents were told his injuries were life-threatening.

Mrs Jones, of Kidderminster, says some of Rhys’ injuries are ongoing and he is still receiving treatment.

His parents reported the comments made by Mr Jefferson to the school the following day and the teacher was “relieved of his tutor group” and apologised to Rhys.

An official complaint was submitted by the parents and an investigation was then carried out by the school.

According to a report, the staffing, curriculum and timetables were reorganised to ensure Rhys was not to be taught by Mr Jefferson during the upcoming school year.

It also stated Mr Jefferson returned to work on September 16 and steps were taken to ensure Rhys and the teacher would not come into contact.

But the family says that Rhys continues to see the teacher on a regular basis, which is having an “impact on his emotional and mental wellbeing.”

Mrs Jones said: “Two weeks after returning to school from the six week holiday, Rhys came home visibly upset and told me that Mr Jefferson had returned to school.

“He has been allowed to keep his job and also retain his head of department status, a position of trust.”

According to a report, the investigation into the incident concluded on October 21 last year.

A spokesperson for King Charles I School said: “The school takes any complaints or concerns very seriously and has policies in place to investigate incidents to ensure pupil’s welfare remains our utmost priority.

“In line with these policies, the complaint was thoroughly investigated.

“The school has abided by the findings of that investigation, taken the required action and kept the family informed throughout.

“Our school community is based on appreciation and mutual respect and we apologise for the distress this incident has caused.”

« Previous post 6 Out of 10 Freelancers Feel ‘Lonely’ - But Does Freelancing Really Damage Your Mental Health?
Next article » 'I've Got Them Out At Parties Before' - Woman Has Knees That Resemble Both Mitchell Brothers!